As Watch Bill Coordinator, he synchronized the schedules of qualified Sailors with known task requirements and reduced delays for maintenance by 30 percent.

As Watch Bill Coordinator, she optimized the performance of our limited manning by matching level of experience to requirements to guarantee safety and mission accomplishment.

She balanced the Watch Bill so that at least two qualified technicians were on duty at all times, reducing the number of jobs opened by Tech Control by 50% and reducing our backlog to zero for the first time in 5 years.

Mature leader. Enforced leave policies and Navy policy on access to educational opportunities while on-duty. Delivered qualified and competent watch standers around the clock for every station.

Teamed with Training LPO to schedule qualified Sailors with those in training; increased task qualification rate while simultaneously meeting or exceeding all watch bill requirements.

He mastered the arduous duties of WATCH BILL COORDINATOR and FIELD TRAINING OFFICER resulting in efficient execution of DAY-TO-DAY OPERATIONS AND THE QUALIFICATION OF 23 SAILORS IN ALL FACETS OF HARBOR PATROL. As WATCH BILL COORDINATOR, PETTY OFFICER KAY'S EXTRAORDINARY LEADERSHIP WAS APPARENT IN THE SUCCESSFUL COORDINATION AND DIRECTION GIVEN TO 33 PERSONNEL PERFORMING OVER 1,900 HOURS OF WATERBORNE FORCE PROTECTION FOR OVER 40 U.S. and COALITION WARSHIPS.

MA1 Taylor demonstrated rare management skills and dedication to her Sailors while acting as the Watch Bill Coordinator, a supervisory position normally assigned to a Chief Petty Officer. She effectively managed a successful division watchbill despite manning being reduced from 22 to 14 Sailors due to increased deployments and rotations. Coordinated a watch bill for 14 sailors that provided more than 28,000 hours of armed watch standing in support of USS Chief MA Division.

WATCH BILL COORDINATOR. supervised 7 Marines as watch bill coordinator of laundry spaces and maintenance of laundry assets in support of 700 marines and sailors.

ET2 Molson accepted responsibility for the duties of Watch bill coordinator and worked closely with related offices to ensure support for all mission areas. He managed and assigned 27 personnel to daily WATCHBILLS for the JMAST ENTRY CONTROL POINT (ECP) AND SUPPORT HELPDESK. In addition, he took responsibility for maintaining a RECALL BILL for 17 JMAST reservist SAILORS supporting IMCMEX-16.

Command watch bill coordinator oversees over 240 watchstanders to include POOW, MOD, Medvac and Duty Driver. His relentless drive and dedication have led to 100% qualifications of professional watch standers.

As the Watch Bill Coordinator, PO Casper lead and mentored not only military personnel, but also gave civilian supervisors confidence in his abilities as a strong manager to represent the department and complete all shop goals.

While acting as the Enlisted Watch Bill Coordinator, he professionally coordinated and maintained seven (7) sections with over 24 members in each, thus ensuring NAVIMFAC PACNORWEST boasted competent Sailors at all levels. He revived a dilapidated program and transformed it into an efficient and effective program, thereby ensuring an easy transition for his relief.

As the Watch Bill Coordinator and Watch Supervisor from XXXX XXXX to XXXX XXXX, BM1 produced watch bills for 36 drill weekends at NOSC St. Louis. Each watch bill is comprised of five watch stations, each with a two-person team. He devoted xx hours of off-duty time per month to contacting watch team members and coordinating with 4 different entities. 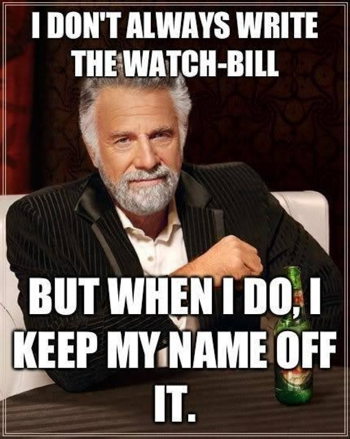