How to Write a Navy EVAL

As stated earlier, the goal of the Navy Eval is to accurately and fully describe a Sailor's performance. While the Introduction provides information on the person's personality and character, most of the Comments on Performance block is reserved for recording the person's accomplishments during the reporting period. A list of accomplishments provide a factual window onto a person's abilities, skills, and productivity. The ratio of the number of lines devoted to accomplishments to the number of lines set aside for the introduction give you an idea of the importance the Navy places on technical skill and ability. Technical and professional qualities are critically important for advancement, fully as important as a person's social and leadership skills.

Sometimes, when the annual performance review comes due, it's hard to come up with enough accomplishments to fill the block. The things we do every day just don't seem out of the ordinary or worthy of a performance report. But they are. The things that all of us do every day are essential to the continued success of the Navy. The way to overcome this natural writer's block is to brainstorm first. List all the ratee's accomplishments on a separate sheet of paper. Write down everything that the ratee does, anything that might qualify as a bullet. Nothing is too small or mundane. Make sure off-duty education, duty qualification, community involvement, and training is addressed too.

One thing that's important to note and that might help you get over your writer's block is that when you're putting together a list of accomplishments, don't hold back! If you're new to Navy Evaluations, you might be reluctant to claim credit for any achievements that you weren't 100% responsible for. Don't be! Most workcenter accomplishments require the efforts of many people and are the product of teamwork. If you had any part in an accomplishment, you are allowed to claim it and list it as an accomplishment. A supervisor will often reuse the same accomplishments, over and over, to beef up several people's EVALs so it's not unexpected or unprecedented. As a rule of thumb, if you had any part in an achievement, from documenting it in a log to turning a wrench, you can claim it. So claim everything and let your supervisor sort it out. And don't worry that your supervisor will scrutinize your inputs and dispute your claims. It doesn't happen. A supervisor is much more concerned with getting decent material for your Eval than with analyzing which person contributed the most to this or that project. 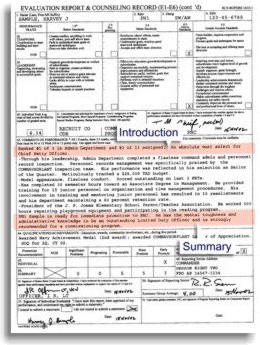 After you've brainstormed and came up with a list of accomplishments, sort them into four categories:

The reason for sorting the accomplishments into groups is because they are required to be listed in the Eval in a certain order. The list above is ordered by the level of importance. When listing achievements in the Comments on Performance block, the duty-related accomplishments should be listed at the top, on the first line of achievements, right below the Introduction. After listing all the duty-related bullets, then list the other categories in the order shown above. Add your leadership-type bullets, then training and self-improvement bullets and finally community service entries. Keep categories together for ease of reading. Keep in mind that the Navy wants well-rounded people. Your Eval should reflect this; make sure you include bullet statements that represent all the categories shown above and whatever trait the Navy is emphasizing at the moment.

Note that some types of achievements must be listed in Block 44:

A suggested number of lines to devote to each topic is:

The duty-related bullets are considered to be the most significant and that's why they're listed first. It is said that reviewers are often in a hurry and can't afford to spend a lot of time reading individual performance reports. They may only glance at the first few lines. So, knowing that we must grab the reviewer's attention in the first few lines, the best accomplishments or bullet statements should be listed first, at the top. The next important accomplishment would be second and so on until you reach the "contributed to the Combined Federal Campaign" bullet at the bottom. Personally I think this business about Senior Personnel having so little time to review personnel records is an urban legend. Any organization that placed so little importance on the selection process that they spent only a few seconds reviewing records in order to fill their most critical positions would quickly collapse under the weight of its own inefficiency. In my opinion, the reason for listing the bullets in this order is to enhance readability.

- Painted over 3,000 square feet of exterior hull 30 days ahead of schedule; reduced corrosion by 50%

Be as Specific as Possible

Be as specific as possible. The overall goal of the performance report is to, as accurately as possible, describe a person's performance. To that end, every statement should be qualified. By that I mean that every claim should be supported by a quantity. For example, consider the bullet statement:

To make this bullet more specific, the number of dogs and cats should be listed. If a high number of pets were treated as compared to the total population, consider listing the number as a percentage if that makes the bullet statement stronger. If 95 out of 100 possible pets were treated, it would have more impact to describe the quantity as a percentage: 95% of base pets treated. Was the disease minor or fatal? What was its impact? Be specific!

Make it Easy to Read

Write the bullet statement so that anyone can understand it. Use ordinary day-to-day English and avoid tehnical jargon unique to your rating. The Evaluation will be reviewed at boards consisting of Senior NCOs from a variety of career fields so it must be understandable to a broad audience not only someone from your unit or background.

After you've entered all the accomplishments that you can squeeze into the available space, go back and edit them for readability. If possible, make them easier to read. Make sure the bullets are listed in a logical order. Make each bullet statement either one or two or three lines long as appropriate. In other words, try not to end one bullet statement in the middle of a line and start another one on the same line.

Ranked #1 of 5 in Operations department and #4 of 10 assigned. Dependable and
capable, an absolute must select for Petty Officer.
- Knowledgeable and fearless, served as Watch Officer, an E-6 duty! Led a team of
joint military personnel providing unparalleled C2 support to the deployed Warfighter
- LEADERSHIP. Set the example for peers and subordinates alike. He is the
cornerstone of our team, reduced backlog of reports by 50%, first time in years!
- 100% scrutiny of all message traffic kept center apprised of rapid changes,
ahead of fleet. Proven ability to oversee CIC in support of joint ops with allied navies
- LOYALTY. Assisted in efforts to make first-ever CPO induction onboard USS Florida
mirroring that of the USS CONSTITUTION; instilled core values in new CPO Selectees
- Attended Norfolk Employment Superbowl; processed hundreds of lead cards for potential
Navy recruits, information forwarded to appropriate Navy Recruiting Stations
- Completed 12 hrs toward Information Systems Management BS; poised for greater challenges
- Engaged in community. Assisted Elementary School, raised over $6K for new furniture
PN1 Dugan is ready for immediate promotion to Chief. He has the mental maturity and
motivation to assume more responsibility and is strongly recommended for promotion.

In general, the more bullets listed, the better. Six hard-hitting two-line bullets are better than four three-line bullets because they indicate more productivity and action. However don't sacrifice quality for quantity.

In the event that you don't have enough achievements to populate the form as shown above, expand the Introduction and Summary to three lines each which will reduce the number of lines for accomplishments to ten. The Eval will still look good.

After writing a suitable Introduction and providing an appropriate list of achievements, all that's left to do is provide closing comments.